US fired 59 Tomahawk cruise missiles at Syria’s Shayrat Airfield in the first major military operation ordered by Donald Trump. In addition to the serious consequences of deteriorating situation in Syria, this attack highlights the reality that international alliances are not as simple today as they were during the bi-polar Cold War when one was aligned with either American or Soviet side. For Pakistan, the Syrian crisis could have serious consequences, including for our involvement in the controversial Islamic Military Alliance.

One of the greatest concerns about involvement in the Saudi-led military alliance was whether Saudi and Iran would be able to overcome differences and adopt a common policy. Members of the Islamic Military Alliance supporting the attack include Saudi Arabia, Jordan, Turkey, and Bahrain. However, Iran has condemned the attack as “dangerous, destructive and violates the principles of international law.”

Russia has also opposed the American missile strike, while China has stayed neutral. The question facing Pakistan now is, how do we fit this reality into our new alliances? Do we support American intervention along with Saudi and Turkey and other Islamic nations? Or do we oppose the American aggression along with Iran and Russia? Or do we try to sit on the sidelines along with China? Is that even an option?

Unfortunately, military alliances are not as simple as slogans about “all weather friendships.” Each nation is going to do what is in its best interest, and unless we are going to be a vassal state who follows a lead whether right or wrong then we also must determine what is in our own interest instead of making decisions based purely on convenient alliances and imagined shared ideologies.

President Obama’s recent trip to Delhi left little doubt that after decades of viewing Pakistan as its ‘most favoured ally’, America is now pivoting towards India. Not willing to be left out in the cold, Pakistan is seeking to enhance strategic ties with old friends like China as well as new ones like Russia. This realignment is an obvious snub to America who has historically had strained ties with China and Russia, as well as an opportunity to expand military and economic ties outside of the US. However, this realignment may be little more than the latest delusion cooked up by the Foreign Office.

Pakistan-Russian relations have always been cool, and despite media reports of a growing bond between the two, facts suggest that little has changed. Just recently, Pakistan executed a Russian citizen over the objections of Russian authorities. Then, in a manner befitting a spy thriller, Russian agents carried out an operation to snatch the corpse from Pakistan.

Pakistan-China relations have been warmer, but there has always been a great amount of evidence that this was little more than show, and that behind the scenes the actual relations are much more tense than is publicly admitted. The difference between fantasy and reality has been demonstrated once again as China has backed India’s Comprehensive Convention on International Terrorism (CCIT) in the United Nations (UN). The CCIT is widely seen by Pakistani analysts as targeting alleged support for jihadi groups in Kashmir.

Meanwhile, Pakistan’s oldest ally, the United States, is cutting aid to Pakistan again, this time by 10 per cent. We will continue to look to other countries to make up the military and economic support, but the reality is you can never get something for nothing. Until we are willing to face the reality of terrorism and extremism in our borders, we may wake up to find that our ‘friends’ existed only in our imagination.

Criticising US policy is a routine part of a Foreign Office Spokesperson’s job. Even when US and Pakistan are in agreement, as with drones, it is important to keep up a facade of standing up to the unpopular global hegemon. Today, however, Foreign Office Spokesperson Tasnim Aslam either misspoke in a blunder of epic proportions, or announced to the world that Pakistan is a state sponsor of terrorism.

END_OF_DOCUMENT_TOKEN_TO_BE_REPLACED

In light of the recent buzz on Social media and its effect on campaigning, New-Pakistan is posting this study which finds “no relationship between usage of Facebook/Twitter and participation in post-election protests” in Russia.

Foreign policy pundits have been bullish about the ability of social media to bring democratic change in authoritarian regimes. Observers have argued that social media can literally “make history” by helping topple regimes, and democracy promoters are sinking big money into a variety of trainings with this very goal.   But in countries such as China, Russia, and Iran, where users of local social networks still far outnumber users of Facebook and Twitter, authoritarian governments have used their leverage over domestic networks to contain online opposition to the regime.

The story of Russia’s most popular social networking platform, VKontakte, illustrates this point well.  In March 2013, reports (ru) surfaced about how VKontakte collaborates with Kremlin officials to gather intelligence on opposition groups that use the site.  The most damning of the reports claimed that the site shut down opposition “groups” and misdirected message traffic between opposition figures.

Indeed, in the aftermath of the December 2011 parliamentary elections, when allegations of massive electoral fraud brought tens of thousands of Russians onto the streets in the largest anti-regime protests since the fall of the Soviet Union, the relationship between VKontakte and the Kremlin even became coercive. Four days after the election, the company’s founder Pavel Durov reported that he had been summoned by the FSB (Russia’s internal security service) to answer questions about opposition activity on Vkontakte. Durov’s hesitation to cooperate fully appears to have landed him in hot water, as investors with ties to the Kremlin recently purchased a 48% share in Vkontakte and Durov may have fled the country after his home was searched in connection with an alleged traffic violation.

In our research on social media, we have found that the ownership structure of social media matters greatly for politics. When nondemocratic governments have leverage over the content and structure of social networks, users lose the ability to access independent points of view and learn about government malfeasance. Not only is information sharing monitored and potentially blocked, but democracy activists avoid networks connected with government authorities for fear of reprisals.

Though scholars have long warned about the attempts of authoritarian leaders to influence the internet, little empirical evidence has been brought forth about the effects of these efforts on politics at the micro-level. In a forthcoming article, we used survey data from the 2011 parliamentary elections in Russia to examine how usage of different social networks affected users’ awareness of electoral fraud. Our results indicate that users of Western networks like Facebook and Twitter are about five percentage points more likely to believe that there was significant electoral fraud during the elections.  Usage of Russian networks, VKontakte and Odnoklassniki, meanwhile had no effect on awareness of electoral fraud.

We argue that the reason for this discrepancy lies in the type of information being spread on these networks. During the election season, local networks’ vulnerability to state pressure seems to have led many opposition activists to focus their social media strategy on Western social networks, such as Facebook and Twitter, which are much harder to monitor and pressure.   Alexei Navalny, Russia’s most popular political blogger, maintained an active public Facebook page and Twitter account, which he used to spread hundreds of YouTube videos, photographs, and anecdotes documenting electoral fraud, and yet Navalny maintained only a token presence on Vkontakte and no presence on Odnoklassniki.  This strategy is at odds with the goal of reaching a mass audience since Odnoklassniki and VKontakte each have five times as many users as Facebook (only 5% of Russian internet users are on Facebook). 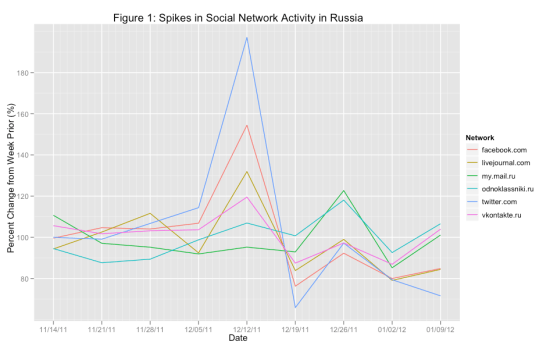 Caption: Figure 1 shows the week on week change in activity on social networking sites in the weeks surrounding the elections.  There were large spikes in activity on Facebook and Twitter, but no such spikes in VKontakte and Odnoklassniki usage.

Of course, it’s possible that individuals with preformed opinions about electoral violations select into usage of Facebook and Twitter and eschew usage of native social media platforms. Its hard to dismiss this possibility, but our findings do indicate that Facebook/Twitter users are remarkably similar to VKontakte users across a range of factors that might be correlated with perceptions of electoral fraud (sex, income, education, place of residence, support for Putin, levels of political participation, and support for the opposition).

Our presumption was also that Facebook and Twitter usage would also increase levels of protest participation, as the emerging narrative suggests.  This should certainly be true if the self-selection process described above was at work (users with preconceived notions about rampant fraud should be especially likely to join protests against electoral fraud).   But surprisingly, we found no relationship between usage of Facebook/Twitter and participation in post-election protests.

Our findings corroborate a slew of recent work that emphasizes an information-centric view of social media, rather than one geared towards organizing collective action. In a clever field experiment, Catie Snow Bailard (gated) randomized free access to Internet cafes in the run-up to Tanzania’s 2010 election. Again, Facebook users were more likely than the average Internet user to think the elections were conducted unfairly.  This finding aligns with recent work done by scholars on thousands of tweets emanating from the Occupy Wall Street protests in Greece, Spain and the USA. They find that online social media are used less for protest organization than they are to spread information about the grievances

What this discussion suggests is that social media’s effects on democratization are not straightforward. The information spreading function of social media is limited when most of a country’s online social networking occurs on domestic platforms that are vulnerable to government pressure, as is the case in a clutch of the world’s most prominent authoritarian regimes.  Indeed, one might speculate that one of the reasons that Russia was able to overcome its protest movement was that it was able to contain and control online dissent, while Egypt, which had no domestic social network, was unable to control the spread of information on Facebook and Twitter.  But a note of optimism is warranted:  Facebook is on the march. Just three years ago domestic social networks still dominated in much of the developing world, but the list of countries where Facebook is not dominant grows smaller every year.